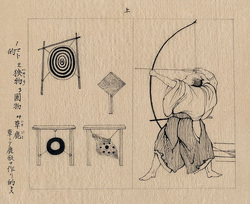 From Wikipedia, the free encyclopedia. (http://en.wikipedia.org/wiki/Kyūdō)Kyudo or Kyūdō (弓道?), literally meaning “way of the bow”, is the Japanese art of archery. It is a modern Japanese martial art (gendai budō) and practitioners are known as kyudoka (弓道家?).

Kyudo is practiced in many different schools, some of which descend from military shooting and others that descend from ceremonial or contemplative practice. Therefore, the emphasis is different. Some emphasize aesthetics and others efficiency. Contemplative schools teach the form as a meditation in action. In certain schools, to shoot correctly will result inevitably in hitting the desired target. For this a phrase seisha hicchū, “true shooting, certain hitting”, is used.According to the Nippon Kyudo Federation the supreme goal of kyudo is the state of shin-zen-bi, roughly “truth-goodness-beauty”,[4] which can be approximated as: when archers shoot correctly (i.e. truthfully) with virtuous spirit and attitude toward all persons and all things which relate to kyudo (i.e. with goodness), beautiful shooting is realized naturally.Kyudo practice as all budō includes the idea of moral and spiritual development. Today many archers practice kyudo as a sport, with marksmanship being paramount. However, the goal most devotees of kyudo seek is seisha seichū, “correct shooting is correct hitting”. In kyudo the unique action of expansion (nobiai) that results in a natural release, is sought. When the technique of the shooting is correct the result is that the arrow hits the target. To give oneself completely to the shooting is the spiritual goal, achieved by perfection of both the spirit and shooting technique leading to munen musō, “no thoughts, no illusions”. This however is not Zen, although Japanese bow can be used in Zen-practice or kyūdō practiced by a Zen-master.[5] In this respect, many kyudo practitioners believe that competition, examination, and any opportunity that places the archer in this uncompromising situation is important, while other practitioners will avoid competitions or examinations of any kind.Since the Second World War kyudo has often been associated with Zen Buddhism. But not all kyudo schools include a religious or spiritual component. This popular view is likely the result of a single book Zen in the Art of Archery (1948) by the German author Eugen Herrigel. Herrigel did not speak Japanese and his view on kyudo was in part due to mis-communication and also to his exposure to a contemplative form of kyudo. Even so Herrigel’s book, when translated into Japanese in 1956, had a huge impact on perception of kyudo also in Japan.[2]Zenko (a Heki Ryu Bishu Chikurin-ha school of kyudo) is affiliated closely with Shambhala Buddhism and has groups in the United States, Canada and Europe.[6

Kyudo is practiced in different schools and styles and even between dojos of the same style, the form of practice can vary. To harmonize practice and ceremonial shooting (sharei) in 1953 the All Nippon Kyudo Federation (ANKF) formed an establishing committee from the main schools to take the best elements of each school and form the ANKF style that is used today throughout Japan and in most kyudo federations in the west.In kyudo there are three kinds of practice (geiko): mitori geiko – receiving with the eyes the style and technique of an advanced archer, kufū geiko – learning and keeping in mind the details of the technique and spiritual effort to realize it and kazu geiko – repetition through which the technique is personified in one’s own shooting.[7]Learning of kyudo starts with a rubber practice bow gomuyumi and by practising the movements of hassetsu. The second step for a beginner is to do karabiki training with a bow without an arrow to learn handling of the bow and performing hassetsu until full draw. Handling and maintenance of the equipment is also part of the training. After given permission by the teacher beginners start practicing with the glove and arrow. Next steps may vary from teacher to teacher, but include practicing first yugamae, then the draw and last release and shooting at makiwara. When a beginner is starting to shoot at the mato, she/he may be asked to shoot from half or three-quarters of the usual distance.[8]Advanced beginners and advanced shooters practise shooting at makiwara, mato and some with omato. A Kyudoka practicing on a Makiwara Makiwara is a specially designed straw target (not to be confused with makiwara used in karate). The makiwara is shot at from a very close range (about seven feet, or the length of the archer’s strung yumi when held horizontally from the centerline of his body). Because the target is so close and the shot most certainly will hit, the archer can concentrate on refining his technique rather than on the arrow’s arc.Mato is the normal target for most kyudo practitioners. Mato sizes and shooting distances vary, but most common is hoshi mato thirty-six centimeters (or 12 sun, a traditional Japanese measurement equivalent to approximately 3.03 cm) in diameter shot at from a distance of twenty-eight meters. In competitions and graduations hoshi mato is used. For ceremonies it is most common to use kasumi mato which is the same as hoshi mato but with different markings.Omato is the mato used for long distance enteki shooting at 60 m distance. The diameter of omato is 158 cm. There are separate competitions also for enteki shooting.[8]There are three levels of skill: 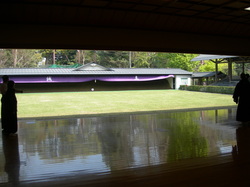 All kyudo archers hold the bow in their left hand and draw the string with their right, so that all archers face the higher position (kamiza) while shooting.Unlike occidental archers (who, with some exceptions, draw the bow never further than the cheek bone), kyudo archers draw the bow so that the drawing hand is held behind the ear. If done improperly, upon release the string may strike the archer’s ear or side of the face.Resulting from the technique to release the shot, the bow will (for a practiced archer) spin in the hand so that the string stops in front of the archer’s outer forearm. This action of “yugaeri” is a combination of technique and the natural working of the bow. It is unique to kyudo.Kyudo technique is meticulously prescribed. The All Nippon Kyudo Federation (ANKF), the main governing body of kyudo in Japan, has codified the hassetsu (or “eight stages of shooting”) in the Kyudo Kyohon (Kyudo Manual). Different styles have their own variations from the steps, most notable difference being between the vertical bow rising shomen and aslant bow rising shamen. The hassetsu of shomen-style consists of the following steps[9]:

While other schools’ shooting also conforms to the hassetsu outlined above, the naming of some steps and some details of the execution of the shot may differ.